I hear this apparently simple question on a regular basis – and I thought I would invite my colleague Fred Van Bennekom, the guru of practical customer surveys, to share with us his wisdom and recommendations. Fred says:

“Everyone conducting a survey is concerned about response rates and the level of confidence they can place in the survey results, and in conference presentations I get asked many questions that show how misunderstood survey accuracy is. (Hint: don’t listen to what your marketing team says.) Survey accuracy does require some fundamental understanding of statistics. In my Survey Design Workshop, I spend considerable time on this topic with a fun exercise using M&Ms to explain “sampling error.”

Here’s an obvious statement: the more completed surveys you get, the greater the confidence. Four factors determine the statistical confidence or accuracy.  But unfortunately, the required sample size is not just a simple percentage.  Statistical accuracy is determined by four factors:

The sample size equations here are a bit daunting. (Check your statistics book.)  I created this chart to make this more understandable. 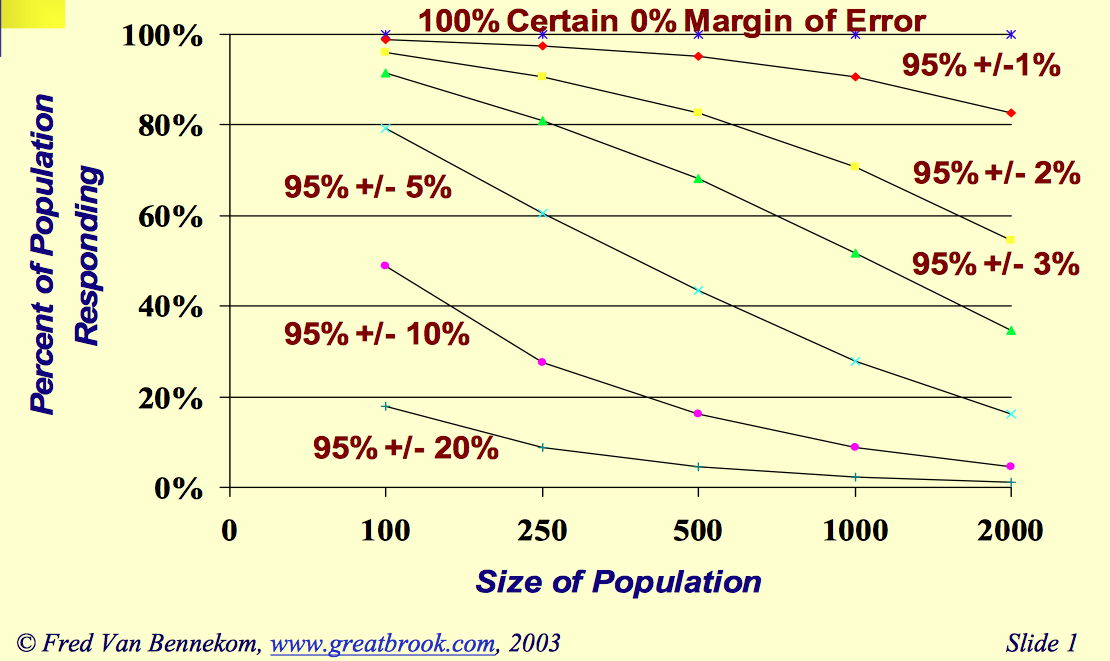 The chart shows seven lines or curves that depict seven levels of accuracy. The horizontal line at the top shows that, if we perform a census and everyone responds, then we are 100% certain that we are 100% accurate.  Of course, that will likely never happen.

Now let’s interpret those curves. Each curve shows 95% certainty of some range of accuracy. The 95% is chosen by convention. Let’s focus on the accuracy part of the statement.

Say you have a population of 1000, and you sent invitations to 500 people. Half of those responded. So, 25% of the population responded. Find the intersection of 1000 on the horizontal axis and 25% on the vertical axis. You would be approximately 95% certain of +/-5% accuracy in your survey results.  If we conducted this survey 20 times, 19 out the 20 times (95%), we would expect the mean score to lie within +/-5% of the mean score found when we conducted the survey.

Conversely, if we have an accuracy goal for the survey project, we can use this chart to determine the number of responses needed. Say, we have that population of 500, and we wanted an accuracy of +/-10%. Then we would need about 18% of the population to respond, or 90. (Find those coordinates on the chart.)

When we actually conduct our survey and analyze the results, we will then know something about the variance in the responses. The confidence statistic incorporates the variance found in each survey question and can be calculated for each survey question. The confidence statistic tells us the size of the band or interval in which the population mean most likely lies – with a 95% certainty.

For a more extended discussion of this topic, please go to: http://www.greatbrook.com/survey_statistical_confidence.htm

As a reminder, Fred is offering a $200 discount on his upcoming workshop in San Francisco on February 24-26. Sign up now here (use the discount code FT Word)! You can find more information about the workshop here.

Get Our Latest Posts